SEGUN ADEWALE AND HIS YO-POP DREAMS


As we make digitally available for the first time some of Sterns Music's first ever releases we take a look back at those exciting times in the early eighties. 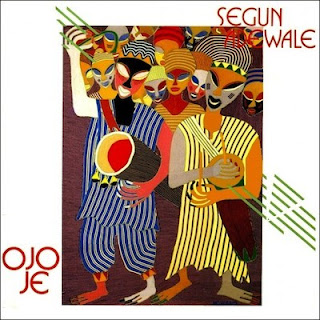 Sterns did not have the resources of Chris Blackwell's Island Records, but that did not deter the UK's first fledgeling record label devoting itself to popular African music from throwing everything we did have at the time into the mix. Stunning cover art from Kofi Ankobra, the son of radical white South Africans who grew up in Ghana and had studied art at Oshogbo, Nigeria, coincidentally the birthplace of Segun, and performances in the UK and Europe that were road-managed by Charles Easmon.

Keeping a 21-piece group on the road, comprising musicians who'd rarely been outside of Nigeria let alone to Europe, was a work of art in itself and the stories are legion. Needless to say it couldn't last, and despite the best efforts of Don Bay, Robert Urbanus and Charles at Sterns, it didn't. Nevertheless the two albums that Sterns released from this time – here, for digital release for the first time, each with extra tracks previously unreleased outside of Africa – are a testament to the energy of the times and surprisingly but gratifyingly, sound as fresh today as they did then. With current interest in West African music, it's good to note that at least as regards Nigeria, it hasn't always been “Fela! A New Musical”


In his own words co-founder of Sterns Music Charles Easmon dips into the past and remembers those heady days touring with Segun Adewale: 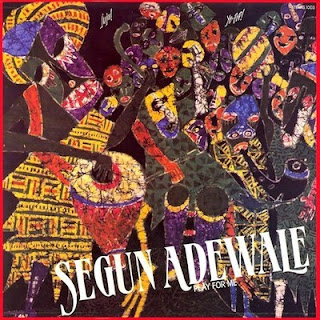 "Back in the early eighties, Nigerian juju music made its way into the international arena with the 1984 Island Records release of Synchro System by King Sunny Ade. European and US tours soon followed.  Back in Lagos, a new generation of musicians with a harder sound was rising to challenge the masters, King Sunny Ade, Chief Commander Ebenezer Obey, I.K.Dairo, and Prince Adekunle.

First among these was Segun Adewale. Prior to going solo, Segun had started with Adekunle’s band, left with singer Shina Peters to form the highly successful Shina Adewale, and finally split to do his own thing.

On signing with Sterns in 1984, Adewale’s rising popularity at home was due to the development of his own style, which he branded yo-pop (Yoruba Popular Music), a funkier, tougher sound.  In his own words, “ It took me a lot of time to put the new sound together. I studied funk, highlife, reggae, and rock. I was looking for something that could cross all the lines to make my music accepted in other parts of the world. When you don’t understand our language, but can dance to our rhythms, you are doing alright.  But the main thing we do is capitalize on the guitars (6 in all).  We’ve got wicked strings.  And my strikers, they strike bad.” Yo-pop at its best is captured on these 2 albums Play for Me and Ojo Je, re-released by Sterns digitally for the first time in July of 2012. 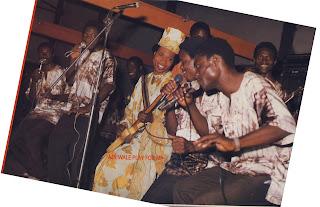 I had the good fortune to tour manage Segun and his 21-piece band on their first UK tour.  It gave me an insight into the world of juju music. The band was led and musically directed by the lead talking drummer, simply known as Captain, and there was a disciplined hierarchy below him. A guest of honour at our performance at Queen Elizabeth Hall in Edinburgh was the Nigerian Consul to Scotland and the embassy staff.   He came backstage prior to the performance, bearing gifts – a crate of whisky, a crate of brandy, and 6 crates of beer.  The imbibing of the gifts did not start until we were on the bus on our way back to London. Segun himself spent the entire journey fast asleep on the back seat. Meanwhile someone sang a line in Yoruba, someone else started a body beat.   One by one, they all joined in, and kept the singing going all the way to London. On arrival, I asked Segun how he had managed to sleep through it, he said it was no problem and that what I did not realize was that from a spontaneous beginning, a brand new song had been created, that juju music was all about transforming the energy of happiness into music. Sure enough, the new song was played for the first time to the public at our next show.

Inspiration, spontaneity, fluidity, flexibility, and joy are all in the juju mix, and it is that which gives these classic albums their timeless quality."


Play for Me now available to download on iTunes:
UK